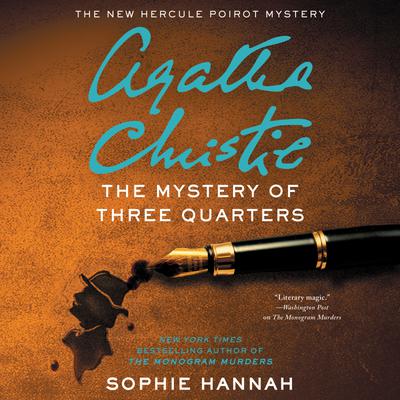 The Mystery of Three Quarters

The world’s most beloved detective, Hercule Poirot—the legendary star of Agatha Christie’s Murder on the Orient Express and most recently The Monogram Murders and Closed Casket—returns in a stylish, diabolically clever mystery set in the London of 1930.

Returning home from a luncheon, Hercule Poirot is met at his door by an imperious woman who introduces herself as Sylvia Rule. "How dare you? How dare you send me such a letter?" Ignoring his denials, Mrs. Rule insists that she received a missive claiming he had proof she murdered a man named Barnabas Pandy and advising her to confess her crime to the police. Threatening the perplexed Poirot with a lawsuit, she leaves in a huff.

Minutes later, a rather disheveled man named John McCrodden appears. "I got your letter accusing me of the murder of Barnabas Pandy." Calmly, Poirot again rebuts the charge. Each insisting they are victims of a conspiracy, Mrs. Rule and Mr. McCrodden deny knowing who Pandy is.

The next day, two more strangers proclaim their innocence and provide illuminating details. Miss Annabel Treadway tells Poirot that Barnabas Pandy was her grandfather. But he was not murdered; his death was an accident. Hugo Dockerill also knows of Pandy, and he heard the old man fell asleep in his bath and drowned.

Why did someone send letters in Poirot’s name accusing people of murder? If Pandy’s death was an accident, why charge foul play? It is precisely because he is the great Hercule Poirot that he would never knowingly accuse an innocent person of a crime. Someone is trying to make mischief, and the instigator wants Poirot involved.

Engaging the help of Edward Catchpool, his Scotland Yard policeman friend, Poirot begins to dig into the investigation, exerting his little grey cells to solve an elaborate puzzle involving a tangled web of relationships, scandalous secrets, and past misdeeds.