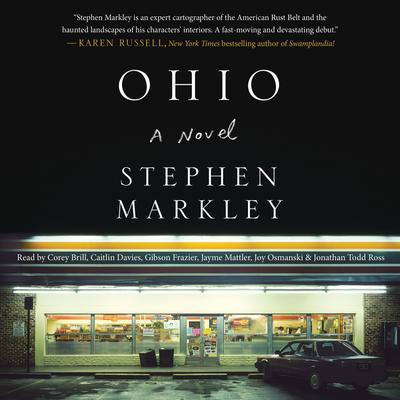 “Stephen Markley’s powerful debut plumbs the depths of the cruel trick played on small-town America during the recession, war, and political and cultural hostility of the last 15 years and delivers us the gift of surprising and exquisite beauty and hope. In this story of four former classmates and one summer night in 2013, Markley gives us insightful and gorgeous prose revealing the humanity that continues to carry on in the broken center of America. I hope to read this author’s keen writing for many years to come.”

“A wild, angry, and devastating masterpiece of a book.” —NPR

“[A] descendent of the Dickensian ‘social novel’ by way of Jonathan Franzen: epic fiction that lays bare contemporary culture clashes, showing us who we are and how we got here.” —O, The Oprah Magazine

“A book that has stayed with me ever since I put it down.” —Seth Meyers, host of Late Night with Seth Meyers

One sweltering night in 2013, four former high school classmates converge on their hometown in northeastern Ohio.

There’s Bill Ashcraft, a passionate, drug-abusing young activist whose flailing ambitions have taken him from Cambodia to Zuccotti Park to post-BP New Orleans, and now back home with a mysterious package strapped to the undercarriage of his truck; Stacey Moore, a doctoral candidate reluctantly confronting her family and the mother of her best friend and first love, whose disappearance spurs the mystery at the heart of the novel; Dan Eaton, a shy veteran of three tours in Iraq, home for a dinner date with the high school sweetheart he’s tried desperately to forget; and the beautiful, fragile Tina Ross, whose rendezvous with the washed-up captain of the football team triggers the novel’s shocking climax.

Set over the course of a single evening, Ohio toggles between the perspectives of these unforgettable characters as they unearth dark secrets, revisit old regrets and uncover—and compound—bitter betrayals. Before the evening is through, these narratives converge masterfully to reveal a mystery so dark and shocking it will take your breath away.