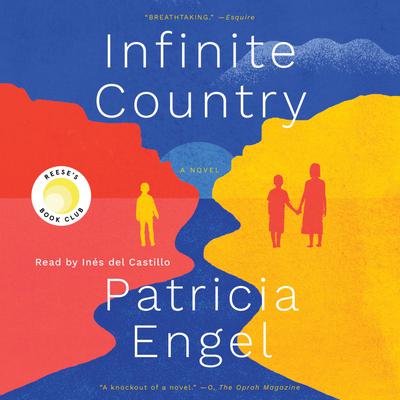 “Patricia Engel’s new book is a true gem, a family story in which each voice is equally interesting and dynamic as well as a great examination on the brutish nature of the U.S. government and citizens toward people traveling stateside to start a new life. Your heart breaks and mends and breaks all over again for this family. In less than 200 pages, Engel works magic.”

“Starting with one of the best first sentences of a novel that I've ever read, Infinite Country is a moving portrait of the lengths a daughter will go to in an effort to reunite her family. Engel gives an intimate look into the challenges of a Colombian family that has been separated after emigrating to America. She also provides a unique view of what it's like to be an outsider in multiple different settings and her comparisons of the violence (and possible opportunities) in both countries are fascinating. With a very emotional ending, I highly recommend this title composed in an undoubtedly distinct voice.”

“This beautiful novel exploring the past and present of a Colombian family that is separated by deportation is timely and impactful. The Andean myths sprinkled throughout are significant to the narrative. Engel’s writing is magnificent and I believe Ines del Castillo’s narration really captures the soul of this story.”

WINNER OF THE 2021 NEW AMERICAN VOICES AWARD, LONGLISTED FOR THE 2022 ANDREW CARNEGIE MEDAL, AND A NATIONAL ENDOWMENT OF THE ARTS “BIG READS” SELECTION

“A profound, beautiful novel.” —People * “Poignant.” —BuzzFeed * “A breathtaking story of the unimaginable prices paid for a better life.” —Esquire

This “heartbreaking portrait of a family dealing with the realities of migration and separation” (Time) is “a sweeping love story and tragic drama [and] an authentic vision of what the American Dream looks like in a nationalistic country” (Elle).

I often wonder if we are living the wrong life in the wrong country.

Talia is being held at a correctional facility for adolescent girls in the forested mountains of Colombia after committing an impulsive act of violence that may or may not have been warranted. She urgently needs to get out and get back home to Bogotá, where her father and a plane ticket to the United States are waiting for her. If she misses her flight, she might also miss her chance to finally be reunited with her family.

How this family came to occupy two different countries, two different worlds, comes into focus like twists of a kaleidoscope. We see Talia’s parents, Mauro and Elena, fall in love in a market stall as teenagers against a backdrop of civil war and social unrest. We see them leave Bogotá with their firstborn, Karina, in pursuit of safety and opportunity in the United States on a temporary visa, and we see the births of two more children, Nando and Talia, on American soil. We witness the decisions and indecisions that lead to Mauro’s deportation and the family’s splintering—the costs they’ve all been living with ever since.

Award-winning, internationally acclaimed author Patricia Engel, herself a dual citizen and the daughter of Colombian immigrants, gives voice to all five family members as they navigate the particulars of their respective circumstances. Rich with Bogotá urban life, steeped in Andean myth, and tense with the daily reality of the undocumented in America, Infinite Country “is as much an all-American story as it is a global one” (Booklist, starred review).